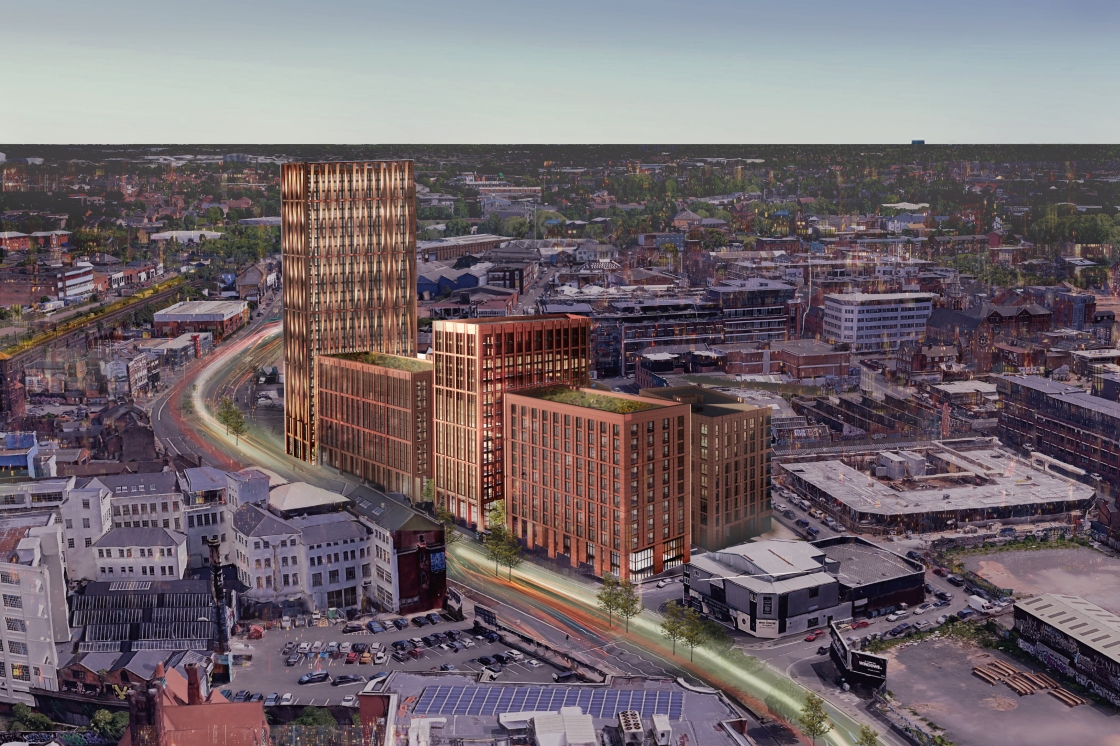 London’s Shoreditch, Manchester’s Northern Quarter, Glasgow’s Finnieston – every big city has its own hipster haven. In Birmingham, that’s Digbeth – and if you haven’t heard of it yet, you soon will.

The story is a familiar one. Once a Victorian centre of industry, Digbeth was home to factories producing everything from buttons and Bird’s Custard to sheet metal and Typhoo tea.

While heavily populated in its heyday, most residents had left by the time the last of that era’s slum housing was cleared in the 1970s.

Light industrial buildings remain to this day, but the real life force in Digbeth are the artists, musicians and start-ups that have taken over former warehouses, turning them into studios, venues and workspaces.

Now, property developers want a piece of the action. Their plans are bold, encompassing everything from towering apartment blocks to a filming complex backed by the creator of Peaky Blinders – one of modern-day Birmingham’s proudest exports.

But will they be able to deliver their vision without compromising the creative community at the heart of the resurgent location?

Digbeth is a surprisingly well-connected part of the city

Most of the developments planned are residential and proponents argue that this will support the burgeoning creative community. They note that it is a prime location, steps away from the city centre — the start of Digbeth’s high street is across the road from Selfridges – but that it is still primarily a night-time economy.

“The aim is to return a population to Digbeth, which is what it needs,” says Mark Sitch, senior partner in Barton Willmore’s Birmingham office. “It’s a surprisingly well-connected part of the city, but also a forgotten part of the city.”

Most of Digbeth is less than 10 minutes’ walk to the future HS2 station and a new tram stop will arrive on Adderley Street under the extension of the city metro.

The new schemes coming forward are far larger in scale than anything that has been delivered in the past few years.

Hub’s 2,000-home Digbeth Bus Garage is at the design stage and Seven Capital’s £200m Connaught Square scheme secured planning consent for 770 units last year. Court Collaboration’s 928-unit Stone Yard is in for planning and the same developer will lodge plans for a 454-unit tower on the site of Digbeth’s Irish Centre next month.

Meanwhile, Homes England has acquired land for up to 1,000 homes on Montague Street and 930 units at Cole Waterhouse’s mixed-use Upper Trinity Street are in for planning.

Most of this will be a combination of build-to-rent (BTR) and build-to-sell.

“The council is keen to deliver build-to-sell, BTR, co-living and student to help create a mixed, diverse demographic,” says Joe Shorney, head of residential development sales at Savills in Birmingham.

Many homes will be occupied by young professionals – Birmingham has seen a spike in graduate retention thanks to the likes of HSBC moving to the city.

The council has pushed for family-sized apartments in other city-centre schemes such as Lendlease’s Smithfield market and developers think there is potential for something more intergenerational in Digbeth. For instance, Hub’s Damien Sharkey says it is considering senior living in its Digbeth scheme, which he says would create “a real mixed community”.

But none of the schemes mentioned above have spades in the ground, and there are concerns about their deliverability – particularly with a recession looming.

“Digbeth’s been earmarked for this kind of development for a number of property cycles,” Joe Williams, associate, residential agency at Cushman & Wakefield says. “Other developments in the city might be achieving £400/sq ft, but values in Digbeth are untested.”

Once one development proves it can sell, he believes others will come forward.

According to Shorney, the city’s preference is for “developments that reflect the area’s start-up culture”. The Custard Factory currently houses 400 small businesses, making it the largest cluster of tech, digital and creative SMEs outside London. This has put the area on the map as a location where young businesses can flourish.

Many schemes are proposing space for the arts, too. “It’s about having flexible floorspace, ensuring we’ve got spaces for makers and creators as opposed to an office scheme,” says Sitch.

The exception is Beorma Quarter, which is being built in the part of Digbeth closest to the city centre. The Princes’ Trust moved into the first phase, a converted warehouse, in 2017, and a new grade-A tower is under way.

On the waterfront: new developments could give Digbeth the green space it currently lacks

“The offer in Digbeth is mostly fashionable, low-tech offices in former warehouses, but this is going to change things,” says Scott Rutherford, partner at Cushman & Wakefield. He thinks tech, marketing or forward-thinking law firms could take space.

Digbeth already has plenty of retail and leisure, but new developments are still coming. Art.quarter, masterminded by Birmingham entrepreneur Jordan Patel, is a mixed-use complex in a former warehouse that will include a gallery, food court, multimedia centre and fitness facilities among other uses, and aims to provide affordable space for independents and training for people in the local area.

Many planned developments are on land that has been amassed over the years to create large estates. If developers take a co-ordinated approach, this offers a big opportunity to improve connectivity and streetscapes.

“Digbeth is in a state of transformation,” says Rutherford. “The progress of the resi schemes will help clean up the area and make it feel much more like its own quarter.”

Landowners Oval, Gooch and Homes England have published a Digbeth Vision, which focuses on environmental improvements such as opening up the area’s canals and making the street environment safer and more pleasant, suggesting a mid-rise, mixed-use format for new buildings. The council is also consulting on a new draft SPD for Digbeth, which should be published later this year.

At Stone Yard, it is opening up a thoroughfare that has been closed off for generations, and it will also soundproof all its apartments to ensure residential can co-exist with the area’s night-time economy.

“Digbeth is renowned for its music and indie economy and we don’t want to move that on,” McCourt says.

Like much of inner-city Birmingham, Digbeth is short on green space – and this is something the new developments could help rectify. Oval’s plans for the Custard Factory include a new public park along the Duddeston Viaduct modelled on New York’s Sky Line and Cole Waterhouse is planning a public park called Pumphouse Park.

Not everyone believes development will improve Digbeth, though. Some worry it will be just another area that is ruined by gentrification.

“One of the biggest fears is that Digbeth will lose what it is,” says Sharkey. “Locals have asked what will happen to creatives and whether they will be able to afford to rent space there. It’s a reasonable question.”

Developers talk the talk about staying true to its artistic roots and there are some early signs that they are walking the walk, too. Cole Waterhouse has employed Birmingham musician Jez Collins as the ‘cultural lead’ on Upper Trinity Street. After dialogue with locals, it decided to have three or four anchor creative tenants in its retail and studio spaces.

“We want to try and create a cool space for creatives, not just pricey places they can’t afford,” says Rod Priestley, its chief operating officer.

It’s important it welcomes people from all social backgrounds

He wants the feel to be akin to Bermondsey Street in London. “What we will not have is Costa Coffee, that sort of bland, generic awfulness,” he says.

Most plans incorporate some kind of space for independent or creative businesses, but with many still in the planning process, it remains to be seen how much will materialise.

It’s not all about artists, though. Like many post-industrial inner-city areas, social deprivation in Digbeth and its surrounds is high. “It’s important we create a scheme that welcomes people from all social backgrounds and all walks of life. It shouldn’t just be for creatives,” says Sharkey.

This is also a key focus for Patel, who wants to use Art.quarter to provide training for local people in the retail and service businesses, as well as to bring together people from the hugely diverse range of communities that make up inner-city Birmingham.

“There’s a lack of culturally diverse space,” he says. “Birmingham is such a melting pot of cultures and races, but we haven’t found a space that brings it all together.”

Patel is planning a 24-hour prayer room in the complex, which he says will be the first in a retail space in Birmingham. In the city’s shopping malls, people are often forced to use changing rooms.

With the bulk of developments currently in planning, the next few years will be crucial in shaping Digbeth’s future.

One thing is certain: locals will be watching closely to see if developers’ promises of artist studios, affordable workspaces and an inclusive environment are kept.